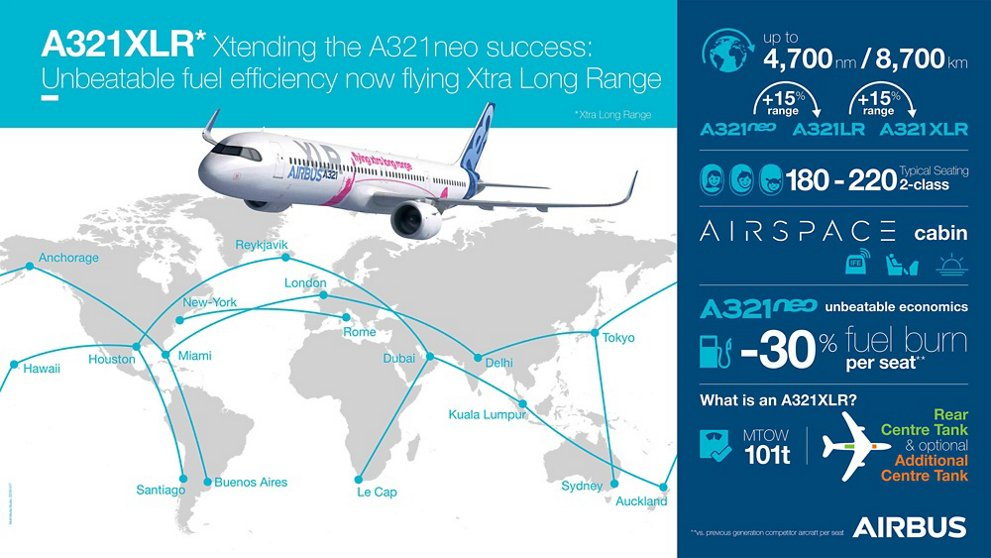 The Paris Air Show yielded a bunch of new announcements for aviation professionals and flight enthusiasts. Although some announcements are more glamorous than others, Airbus’s new city-to-city plan caught our attention. The airplane manufacturer wants to connect larger (and commonly-traveled) cities by direct route. And they hope to save money while doing so.

At the Paris Air Show, Airbus announced their narrow-body jet plane. This skinny plane is essentially an adaptation of the A321. However, unlike the original, the new variation is capable of covering about 15% more miles.

The rough estimates provided by Airbus state the lean A321XLR can cross about 4,500 nautical miles. To put that into perspective, the distance is just enough to cover a direct route from New York City to Rome. And that trip would take under 9 hours no less.

The Effect of Fuel Costs

With the price of fuel remaining high, airliners are actively seeking out ways to reduce it (or avoid it altogether). Higher fuel prices mean higher airplane tickets. And the higher the ticket rate, the lower the odds passengers are willing to pay it.

The high cost of fuel is why the demand for airplanes with lighter fuel consumption is at an all-time high. Airbus’ decision to make the A321XLR fits into this market pattern.

Airlines that buy the lean aircraft will be able to do more than save money on fuel. They will also be able to connect prominent cities by direct route and sell those tickets.

More airline pilots may be able to start their shift in Sydney and end it in Tokyo with an increase in direct flights between large cities.

According to Guillaume Faury, Airbus CEO, “You can use a narrow-body, a single-aisle plane going long distances, and you can connect cities that had no possibility of connections with a good business case”.

The prospect of having inexpensive long-distance flights may result in more air traffic as well. And not just from big name airliners either. Aircraft that run light on fuel are likely going to attract everyone in the aviation business.

The A321XLR can seat 220 passengers at max. Although this may be a bit cramped for the passengers, it will not be much different for pilots in regards to cabin space.

With the number of possible passengers and the reduced expense of operation, the A321XLR is set to become a staple in airports. Look for Airbus’ new jet some time in 2023.