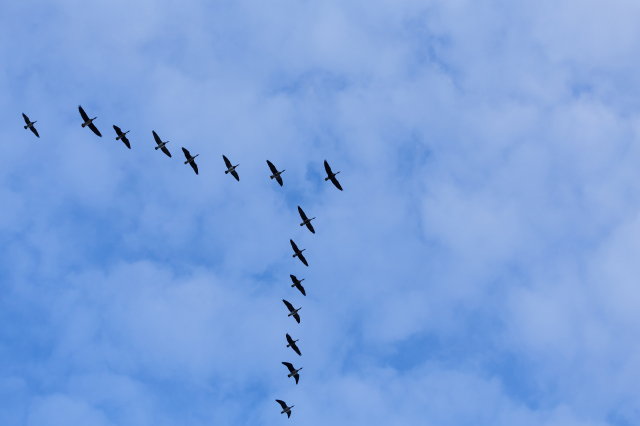 For centuries, humans looked to birds and pondered “Can we fly too?” Using this curiosity, the Wright Brothers set to work to prove flight was possible for humans. Early airplanes were even designed to mimic the shape of a flying bird.

Although the exact model of a plane has changed since then, one thing has remained the same - Birds reveal key insights into aviation, and airplane manufacturers can capitalize on the data.

What Airbus Gleaned From Birds

Ever wonder why geese fly in a V formation? This flying pattern helps all the birds reserve energy. The reason this occurs is due to disturbed air. To elaborate, the first goose or duck expends energy to generate pockets of swirling air. As the swirl breaks apart, the moving air creates an updraft.

Non-leader birds of the V formation can stay on the outskirts of the swirl dissipation to take advantage of the lift. From there, the extra boost reduces muscle fatigue by lowering the amount of effort birds need to produce to stay afloat.

Airbus is developing a system that mimics the arrangement, dubbed the Fello’fly. Commercial airplane pilots participating in the program would fly in a similar fashion as the V formation. Unlike geese or ducks, however, there would likely only be two planes in the group rather than a flock.

Airbus reports that by using the nature inspired formation, aircraft carriers can reduce fuel consumption by about 10% per flight. As an added bonus, the flying pattern may also lower flight-related pollution.

As exciting as this promising venture is, there is one major hurdle impeding implementation.

Airplane Positions Must Be Borderline Perfect

Unlike birds, pilots currently have no way to determine where the swirling vortex is. Due to this, attempting the V formation without perfect planning can be dangerous. For example, if the non-leading plane gets too close to the front aircraft the air vortices push the airplane down instead of providing lift. To improve the situation, the Fello’Fly system works as follows:

To determine the feasibility of Fello’Fly, Airbus conducted three tests in July 2020. During the process, the trailing aircraft stayed about 1.87 miles behind and 49 feet below the front plane.

According to Nick MacDonald, Airbus Project Leader and Engineer, “These tests demonstrated that it is possible to stabilize the aircraft within the wake updraft on autopilot and that the fuel savings are significant”.

Additional follow up tests will be conducted over the Atlantic Ocean.

A small miscalculation, unforeseen air pocket, or any number of other potential issues could cause two airplanes to go down. Taking this into consideration, Airbus is taking the Fello’Fly testing phase very seriously.

Flights should have at least 1150 feet of clearance below so that if pilots need to change altitude, they may do so safely. The program would also likely be restricted to low travel areas, such as over the ocean.

If everything goes as planned, the Fello’Fly system may be utilized on commercial flights as early as 2025.