Watch This: A Vintage-Style Aviation Chronograph

Published: 02-18-2020
APC gets hands-on with a watch inspired by a Swedish Air Force classic. 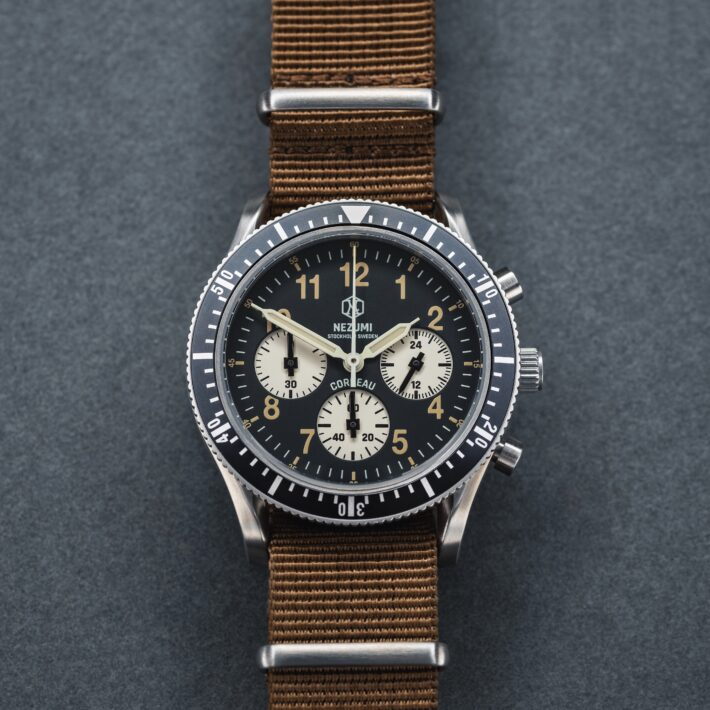 Although the type of stopwatch known as a “chronograph” was originally created to track astronomical objects, the ability to accurately measure time that was accurate to the second became an ability that many pilots would cherish.

Today we’ll be looking at a pilot’s chronograph from Nezumi that they call the “Corbeau.” Read on to find if this watch is fit for your wrist.

The inspiration for Nezumi’s Corbeau harkens back to a 1970s classic - one of the most iconic pilot’s chronographs, the Lemania “Viggen.”

The Viggen chronograph watch from Lemania was issued by the Swedish Air Force, and became a useful tool for those pilots.

“Viggen” translates to “thunderbolt,” which was a nickname derived from the Saab 37 Viggen, a single-seat fighter plane. Although the plane is now retired, vintage watch collectors still seek out the “Viggen” chronograph watch to this day. 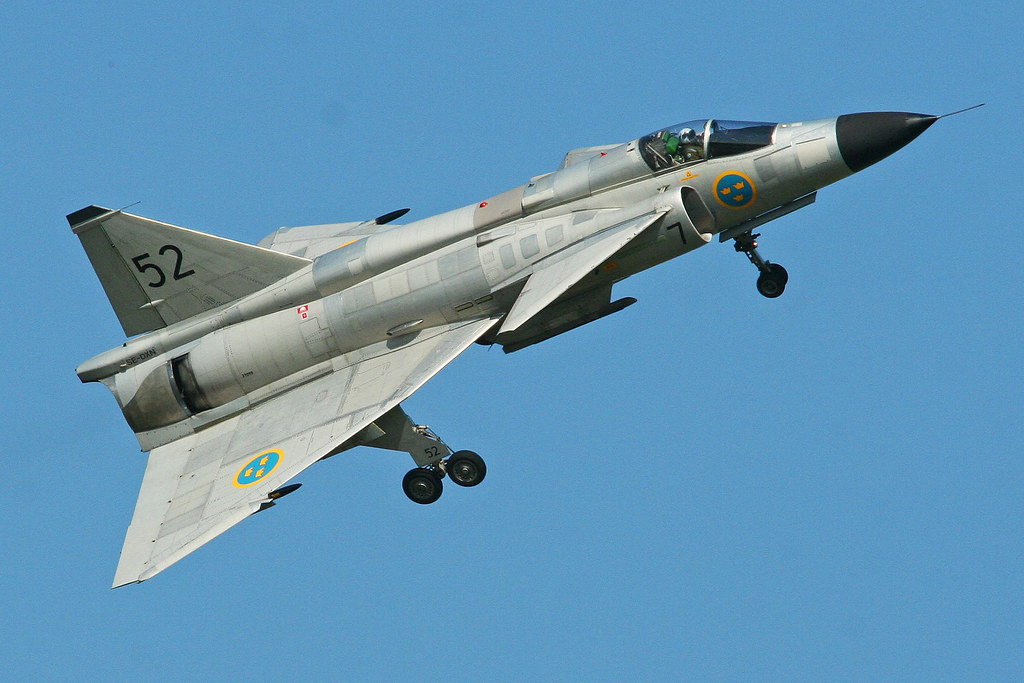 Nezumi was founded by vintage car enthusiast and watch collector David Campo Cárdenes. Based in Stockholm, Campo Cárdenes has a familial connection to aviation. His father was a pilot in the Spanish Air Force, and his grandfather a pilot and commander in the Swedish Air Force. (His American step-grandfather was a Marine as well, so the military connection spans continents.)

Campo Cárdenes credits his “genuine passion for heritage” in the creation of his vintage-inspired watches, so it only makes sense that he would create a pilot’s watch inspired by a classic.

Advertised as a “mil-spec aviation chronograph” - These military specifications (mil-specs) were documents produced by governments and made available to manufacturers who wanted to sell watches to the government.

The Nezumi Corbeau is advertised as a “mil-spec aviation chronograph.” The term “mil-spec” references the fact that the watch meets military specifications required by governments from watch makers.

The Corbeau combines a mecha-quartz movement with the classic inspirations we’ve discussed. But how does the watch look and feel in person?

Airline Pilot Central was not paid for this article, but Nezumi did send over a Corbeau so we could get our hands on it. Let’s take a look.

Pilot’s watches usually have two immediate requirements: How well they can be read quickly; and how do they perform in low light situations.

To answer the first question, the Corbeau uses decently-large Arabic numerals in a simple font to keep the hour indices legible. These numerals are an orange/brown-ish tone that gives a suitably vintage feel.

To answer the second question, the hands and numerals use Swiss Luminova to provide a strong glow in the dark.

The inspiration for the Corbeau – the “Viggen” - only had two subdials, but the Corbeau actually has three in a 9, 6, and 3 o’clock configuration.

There is a Nezumi logo underneath the 12 o’clock numeral. This could have added unnecessary clutter, but it balances the dial given the positioning of the subdials.

The watch we looked at has a vintage black dial with off-white subdials. This “reverse panda dial” color with the off-white gives the watch a stark contrast and an iconic look. The markers on the subdials are black and create a very readable contrast.

The hour and minute hands are a syringe shape, and they are also colored in this vintage off-white. The watch has the look of something that stepped out of the 1970s.

Although the watch also comes in all black with black subdials and an olive green dial, we think this configuration looks best. 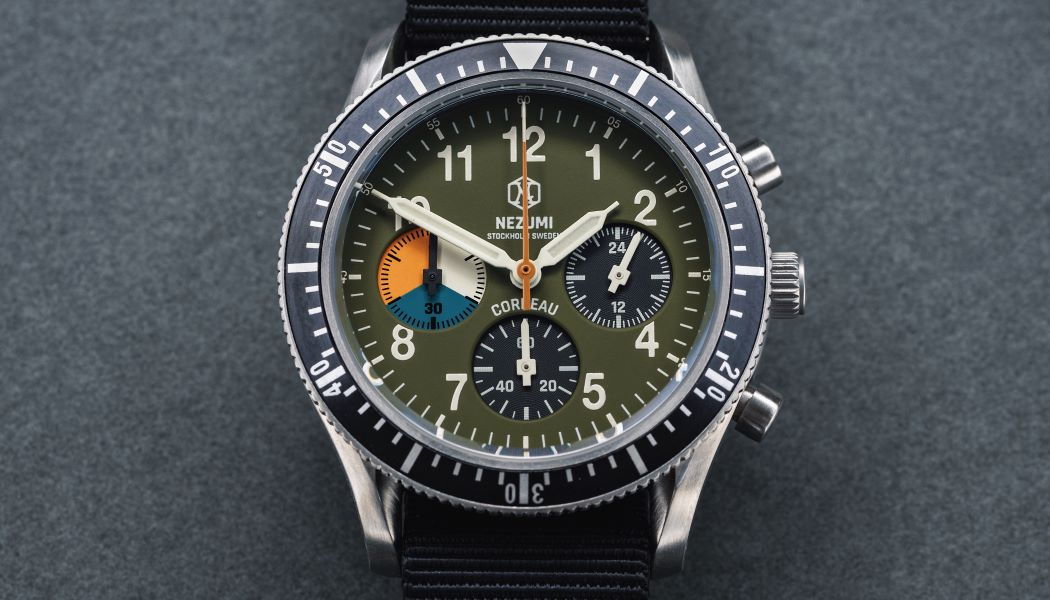 The stainless steel case is 40mm in diameter with a lug-to-lug of 47mm. Eschewing the trend for over-sized watches, this lug-to-lug length seems to be a sweetspot for a good range of wrist sizes.

Although the watch is inspired by vintage, the Corbeau sports a double-domed sapphire crystal with anti-reflective coating on the inside. This modern touch will help this watch serve as a durable tool for those who want one.

The Corbeau is advertised as having a height of 11.75mm, but this excludes the domed sapphire glass. At the highest point, the Corbeau will reach above that measurment. Fortunately, the dome helps the watch slide under the cuff with a bit more ease.

The watch sports a black unidirectional bezel for those who want to use more than the chronograph functions for timing. That said, the watch is waterproof to 5 ATM or 50 meters, so you won’t be taking this diving. 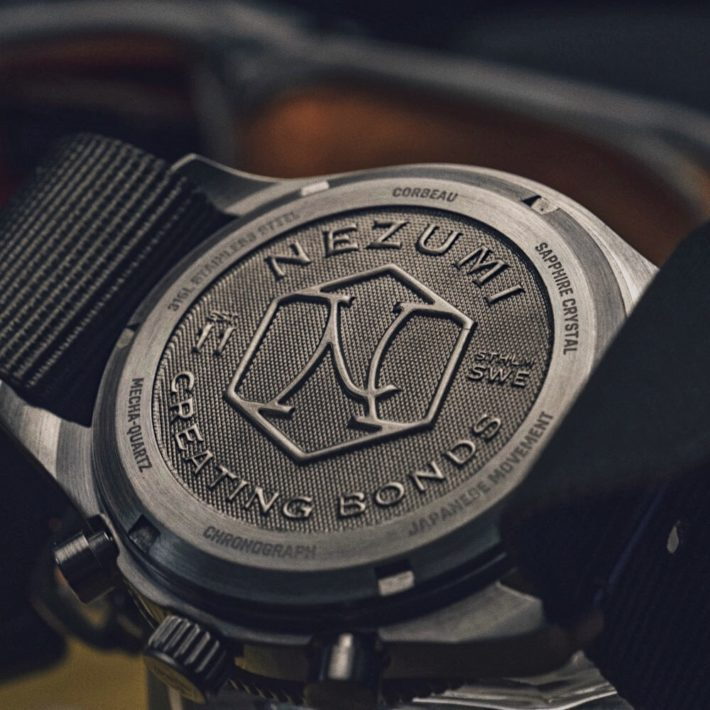 The caseback is solid with the Nezumi branding and the slogan “Creating Bonds.” The lugs gently curve inwards which creates an aesthetically-appealing shape, but there’s nothing that stands out too much about the case itself.

The Corbeau we received comes with a brown leather strap with a decent thickness that lends to the pilot watch feel. Nezumi also included a brownish NATO strap that we believe is their “burnt gold” color.

On their site, Nezumi offers the NATO strap with options of black, burnt gold, or grey. These straps are made with laser-cut nylon.

For those who don’t know what a NATO strap is, this type of strap slips under the watch and over the spring bars where the lugs end. Developed by the British Ministry of Defense, the NATO strap is a single piece that loops back around, providing a secure method of holding the watch into place.

Some watch enthusiasts love the NATO strap due to its tough, secure, military look and feel. They especially favor the NATO in warm weather when leather bands might get damaged by sweat. Others dislike them due to the additional height they add to the watch when the strap loops underneath.

It’s great that Nezumi sent us both a leather and NATO option, which they hopefully include for all purchases.

The Corbeau is powered by the VK63 meca-quartz movement made by Seiko. This “mechanical quartz” combines two technologies in one.

The timekeeping is done with the superior accuracy of a battery-powered quartz, and the time-measuring chronograph is done through a classic system of gears. The pushers for the chronograph have a mechanical feel.

The advantages of the meca-quartz are the accuracy in timekeeping, reduced service costs, and an increase in durability.

The disadvantage is that you give up the intangible “feel” of a vintage piece with a battery-powered watch. For a watch like the Corbeau that trades on its vintage looks, that seems worth mentioning. 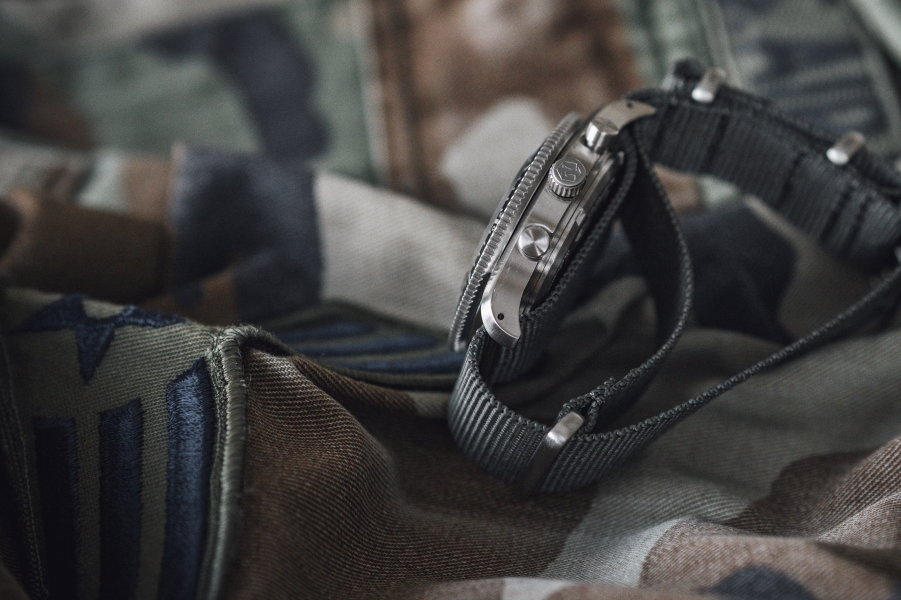 The debate about battery-powered vs mechanical vs hybrid systems will continue to rage among watch collectors.

If that debate doesn’t interest you, then you should know that Seiko is one of the most reliable manufacturers for watch movements, and the VK63 that powers the Corbeau should last for years to come.

The Corbeau is available directly on Nezumi’s website for $322. You can select your watch dial colors and NATO strap colors on the shop page.

That price is reasonable for a meca-quartz chronograph produced by a small watchmaker. For the truly price-conscious, however, it’s easy to find chronographs such as those made by Seiko (whose movement is inside this watch) for at least $100 less.

What you are getting with the Corbeau from Nezumi is style. You are paying a little extra for a vintage look, and if you go with the reverse panda dial, then that look is a classic.

Overall, the case and size of the watch position the Corbeau as a go-anywhere and do-anything watch. This watch offers multiple timing functions with a sturdy case design and durable movement. The Corbeau could be equally at home in the cockpit as driving on the road or at home with the kids.

The quartz movement ensures that the watch will always be set as long as there’s a working battery.

Pilots who prefer convenience over engineering capability will be pleased that they can always just pick up this watch and be ready for the day’s flight plan.

And most importantly, this watch achieves its main objective – to embody the design of a classic aviation chronograph.