What is a Flieger? The Iconic Pilot’s Watch from STOWA

Published: 12-12-2019
Airline Pilot Central takes a look at the quintessential pilot's watch. Should this on your holiday wish list? 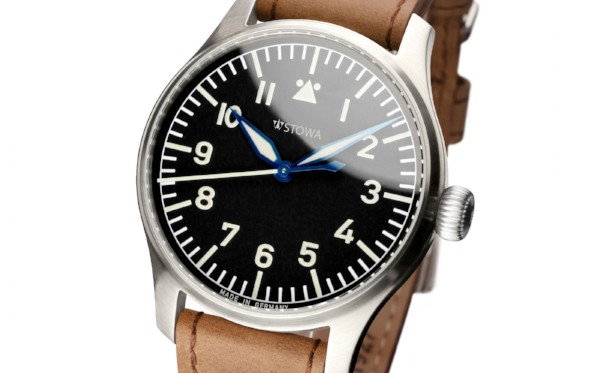 Most airline pilots today don’t put much thought into what they put on their wrist. Commercial air pilots will slap on an Apple watch or a Casio G-Shock if they prefer functionality, or maybe they’ll wear a Rolex for some luxury or status. But it wasn’t always this way.

Aviation and watches have a rich history. In 1906, only three years after the Wright Brothers pioneered the first powered flight, the first pilot’s watch was designed by Cartier to be clearly legible while both hands were controlling an aircraft.

Some credit that watch -- the Cartier Santos -- with popularizing wristwatches, effectively replacing the long-held tradition of pocket watches.

The pilot’s watch continued to evolve and became an essential tool for flight. Sometimes these watches would be constructed as large as 55mm in diameter, designed to be worn over a thick jacket.

And the most iconic pilot’s watch – the definitive design – is the Flieger.

The Flieger (literally “flyer” in German) was first designed in World War II, as aerial combat became the critical front in battle. Today, watch aficionados wear the Flieger for its heritage as an essential part of watchmaking history.

As a commercial airline pilot, or even a private pilot, you no longer need a pilot’s watch for timekeeping. Most of displays you need are right in front of you, and your wrist is simply for style.

But if your style includes a unique piece of aviation history with a classic design, you might be interested in purchasing a Flieger of your own. Especially with the holidays coming up.

In this article, we’ll take a look at STOWA, one of the five companies to originally produce the Flieger, and their Flieger Classic 40. Read on to find out if this historical timepiece is for you.

The Beginnings of STOWA

In 1935, the company moved its headquarters to Pforzheim, a decision that would impact the history of the company. A couple years later, STOWA began producing watches in the now-trendy Bauhaus style.

The Bauhaus was a German art school, and the prevailing aesthetic was one of simplicity and function. Although the actual school was forced to close by the ruling Nazi Party in 1933, STOWA nonetheless began producing Bauhaus-style watches in 1937.

The clear, legible numerals and simple design from the Bauhaus style would inform the iconic Flieger pilot’s watch in the years to come. 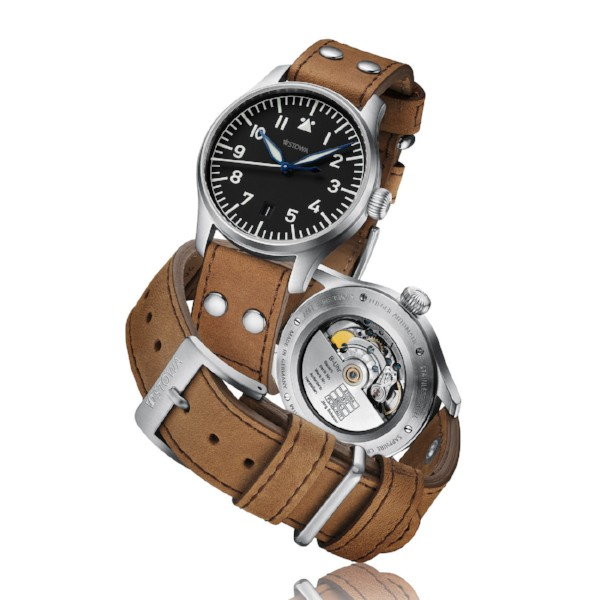 STOWA and the Flieger Pilot’s Watch

In 1939, STOWA began production of the Flieger for the German Luftwaffe, or the German air force. STOWA was one of only five watch companies to create these watches. The others include IWC, Laco, Wempe, and Lange & Söhne.

The Flieger was at the forefront of design and technology for pilots. There is no debate about the problematic history of the Flieger watch, but military aviation required precise timepieces with easy readability. STOWA was one of the few companies capable of producing them.

Much like the Volkswagen, the Flieger has its beginning in the Nazi regime, but the design is no longer associated with Nazi terror. Many pilots of various political affiliations have worn the Flieger since that time.

The original Fliegers were as large as 55mm in diameter and were designed to be worn over a pilot’s or navigator’s jacket. The dials were a simple matte black, and the crowns for manual winding were large enough to handle with gloves on.

The Flieger was produced in two designs: The Baumauster A, which is the more recognizable version with numerals for only the hours; and the Baumaster B, which features the hour numerals on an inner ring with minute numerals on the outer chapter ring. The B watches began production in 1942.

Both the A and B are also referred to as B-Uhr, short for Beobachtungs-uhren or “Observation watches.”

At the end of the war, on February 23, 1945, the STOWA building in Pforzheim was destroyed by Allied bombing.

Rebuilding and the Reintroduction of the Flieger Pilot’s Watch

STOWA built a new headquarters in Rheinfelden in 1951. This building was expanded two additional times in 1954 and 1966, as the original head office in Pforzheim was rebuilt.

The company returned to creation of classic watches, and Werner Storz – the son of original founder Walter Storz – took over the company until 1996. In that year, STOWA was sold to Jörg Schauer.

One of Schauer’s first initiatives was to revitalize STOWA by leveraging their legacy. In just one year and under new ownership, the company reintroduced the Flieger.

The clean, functional and historically significant design of the quintessential pilot’s watch had not been replaced, and STOWA’s line of Flieger watches remain a success to this day.

STOWA offers multiple designs of the Flieger, including both the Baumaster A and B models, and a couple of color options with white, grey, and black dials.

Airline Pilot Central wasn’t paid to write this article nor is it sponsored content, but STOWA did send over a Flieger Classic 40 so we could give you a hands-on review. 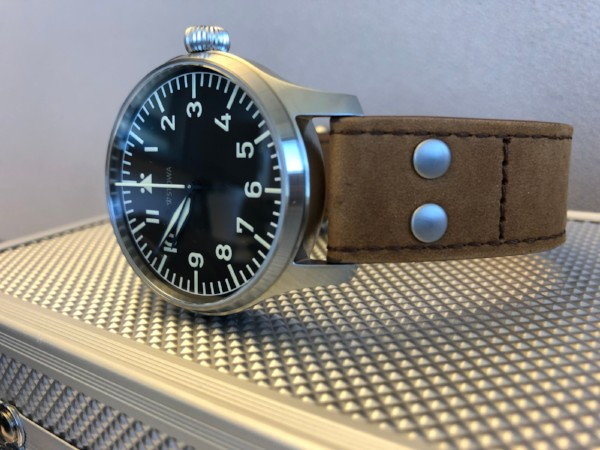 The version of the Flieger Classic 40 that STOWA sent to APC is the Baumaster A model. The numerals on the dial clearly prioritize visibility. There are no tiny fonts here, and the C3 SuperLuminova makes the watch easy to read in the dark.

Similarly, the indices are a thick white against the matte black dial. The hour indices also have lume, and the glow on this watch is particularly powerful.

One of the most recognizable traits of the Flieger is the triangle flanked by two dots at the 12 o’clock hour. This triangle made it easy for pilots to instantly find their orientation, saving the milliseconds required to read the numbers themselves. For a fighter pilot, this could have meant life or death.

The hour and minute hands are blued through the heating process, which offers a noticeable pop of color and watchmaking craftsmanship. This blue appears to surround the luminous material applied to the hands, which again foregrounds functionality to ensure pilots can tell the time in any lighting condition.

A central seconds hand, powered by the automatic movement, sweeps across the dial. As a sign of fine craftsmanship, the seconds hand perfectly aligns with the markers on the dial as it passes each one.

STOWA sent us a version with the logo, and it isn’t overbearing. But if you want the original design, go without the logo and the date.

We don’t think there would be much demand for the original 55mm to wear over a flight jacket, so any prospective buyer should be able to find a Flieger that fits their wrist size. The fact that STOWA provides options for case size in addition to customization is a welcome surprise.

Lug-to-lug distance is often more important than case diameter when deciding a fit, and the lug-to-lug height on the Classic 40 is 48.6mm. The lugs slightly curve downwards rather than sticking straight out.

The crown features another pilot watch classic – the onion. With ridges like an onion, the crown allows for easy manipulation.

While the original pilot’s watches were designed to survive the elements, some details held up better than others. Fortunately, STOWA went with a modern scratch-resistant sapphire crystal. The back of the case is also sapphire crystal, allowing you to view the automatic movement at work underneath.

The watch is waterproof up to 5 ATM or 50 meters. You’ll want to keep your Flieger in the skies, not the ocean.

The Flieger Classic comes with a tan leather strap with dark brown contrast stitching that completes the classic look. The strap is most noteworthy for the metal clasps that add a rugged aesthetic and will remind you of sitting in an aircraft with only a single seat.

The leather is thick and durable and fits the watch well. But if you want to switch the straps and dress it up a bit, the Flieger Classic 40 comes with a convenient 20mm lug width.

As APC is not a watch blog, we must point out that this is a mechanical watch. No quartz batteries here. The watch is powered by a main spring, balance spring, and gears, and you can see it working through the sapphire caseback.

STOWA chose an automatic ETA caliber 2804-2 movement for the Flieger Classic 40, which winds watch through the movement of your wrist. But if you want an exclusively manual-wind watch, that option is yet another customization choice from STOWA.

The rotor is engraved with “B-Uhr” and the STOWA name, so even if you go with the logo-free option, you’ll know that you have an authentic Flieger.

The Flieger Classic 40 costs 882.35€ (Euros) which converts to $979.78 when you purchase from the STOWA website. An affordable price for an automatic watch with this amount of history.

Everything about the design of the dial and the case follows the design principles of the Flieger and of Bauhaus before it. This is a functional watch with admirable simplicity.

It’s easy to get the simple stuff wrong, but STOWA shows reverence for its heritage with an attention to detail.

This is the iconic pilot’s watch, and the Flieger is one way to experience true aviation history, even if you are sitting at the controls of an air-conditioned 747. You might even want to show it off to your co-pilot.

If you want to purchase directly from STOWA, click here to check out the Flieger Classic 40 and don’t forget to choose your customization options.