Published: 02-11-2020
If you love classic planes like the Spitfire, you’ll want to check this out. 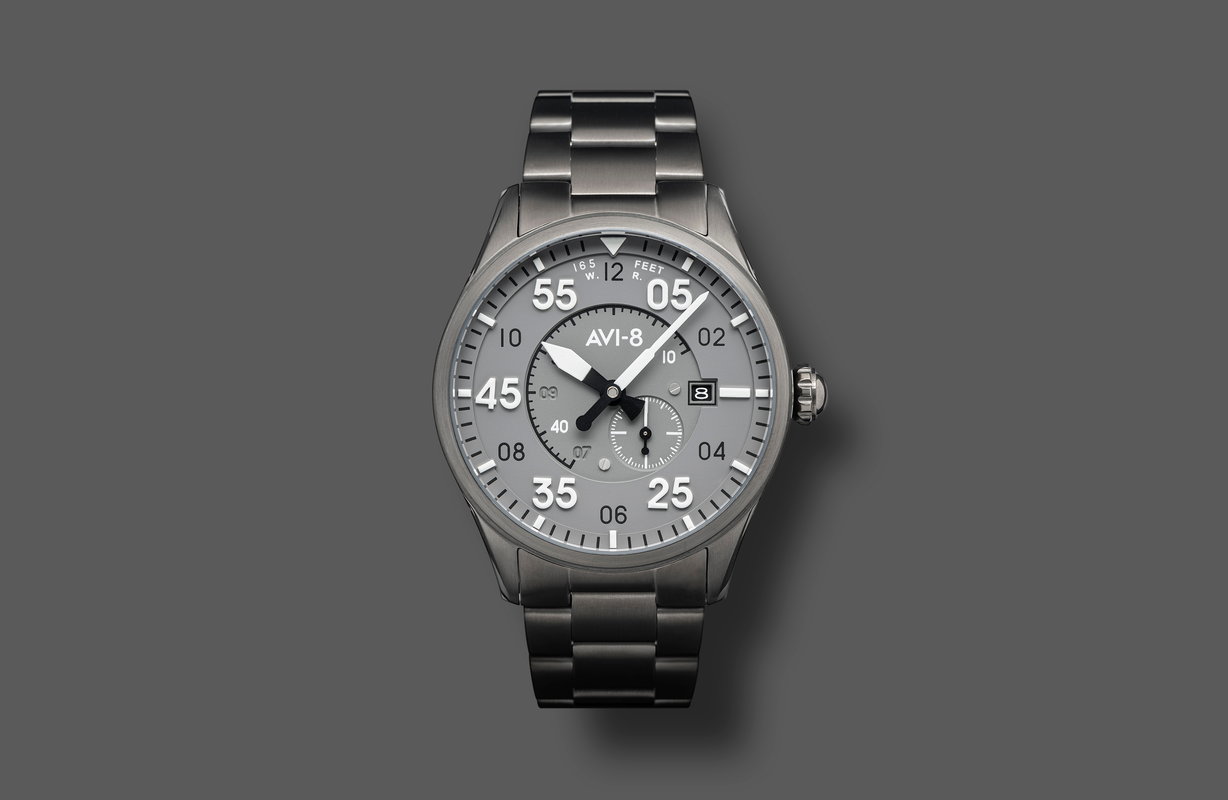 Aviation and watchmaking to hand-in-hand. From the classic Flieger design to precise chronographs, many watchmakers have designed timepieces around the needs and wants of pilots. But how many watches are actually inspired by the planes themselves?

AVI-8 is a company based in the UK that creates watches dedicated and inspired by real aircraft. With details that mirror the cockpits and form of the aircraft, these are pilot’s watches, but they’re also aircraft watches. And that’s a unique selling proposition in a crowded market filled with microbrands promising their own take on the iconic designs of past pilot watches.

AVI-8 – that’s “aviate” if you haven’t yet gotten it – not only offers watches with design cues direct from iconic aircraft, but they also offer them for an affordable price.

Their latest is the Spitfire Type 300 Automatic Edition. This is a watch designed by the legendary Spitfire fighter plane, and if you’re not familiar with that famous aircraft, then read on.

What is the Spitfire? 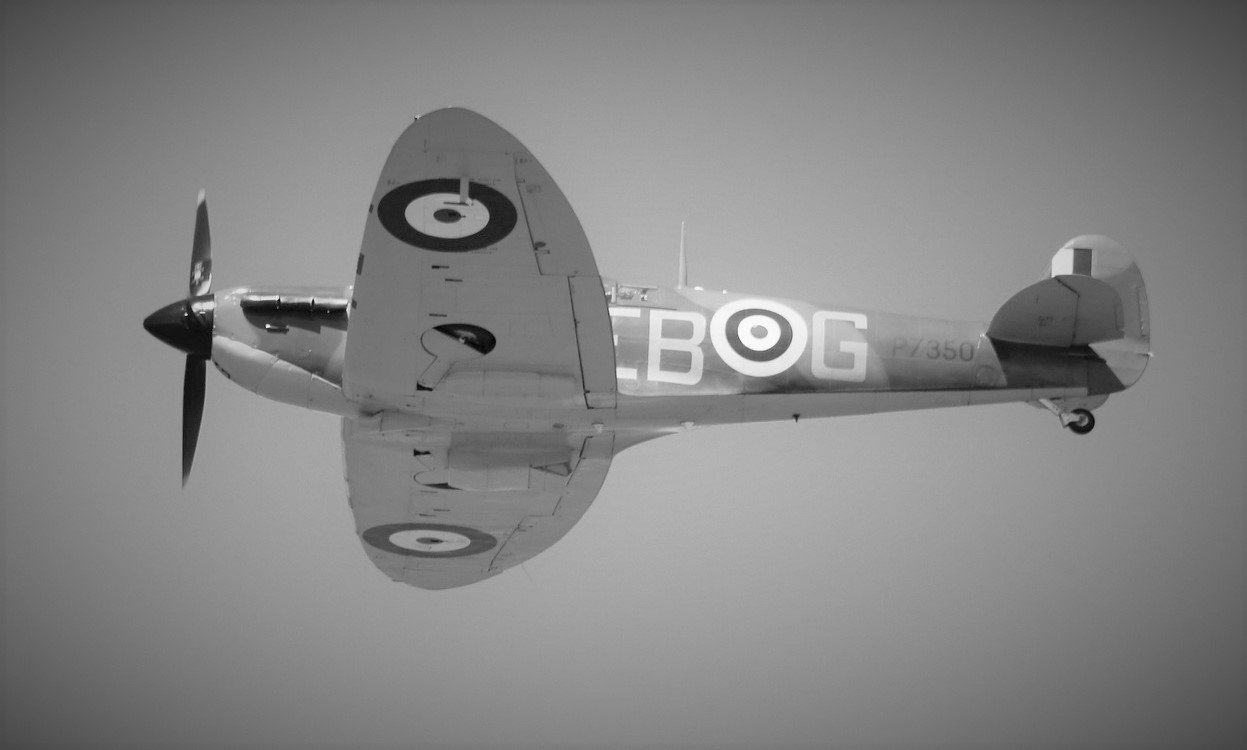 Originally designed by Reginald Mitchell of Supermarine Aviation Works or Supermarine, Ltd., the Spitfire is also known as the Supermarine Spitfire.

The British Air Force required a fast, short-range fighter that could intercept other aircraft and win intense dogfights. To meet these requirements, the Spitfire was based on a series of planes originally designed by Mitchell for racing.

The Spitfire featured an elliptical wing (honored in the design of AVI-8’s Spitfire watch) and a thin airfoil that allowed it to reach extremely fast speeds at high altitudes. It was this high-altitude performance that leads many historians to credit the Spitfire with defeating the Nazi Luftwaffe at the Battle of Britain – a decisive WWII battle and the first ever major military battle fought entirely in the air.

Today, 60 Supermarine Spitfires are still active, and the Spitfire remains popular among enthusiasts.

The Spitfire plane is worthy of the honor of a tribute watch, but what about the watch itself? How does the AVI-8 Spitfire Type 300 handle in action?

The watch itself is not yet available for purchase, but AVI-8 did send over their newest model so we could give you an early hands-on impression of this latest watch for 2020.

Airline Pilot Central was not paid for this article, but we wanted to give you an early review before the official release on February 28th.

The dial is where you can immediately see the influence of Spitfire, and it’s clear a lot of thought went into the design. This is not a simple configuration, but each individual piece is maximized for readability, which is a necessity for the tradition of pilot’s watches.

The hour hand is inspired by the Spitfire’s altimeter, while the more syringe-like seconds hand are inspired by the knots gauge. Not only the shape, but the distinct black-and-white split color on the hands is mirrored on the watch as well. Although the dial could be considered busy, the ends of the white hands prioritize readability. 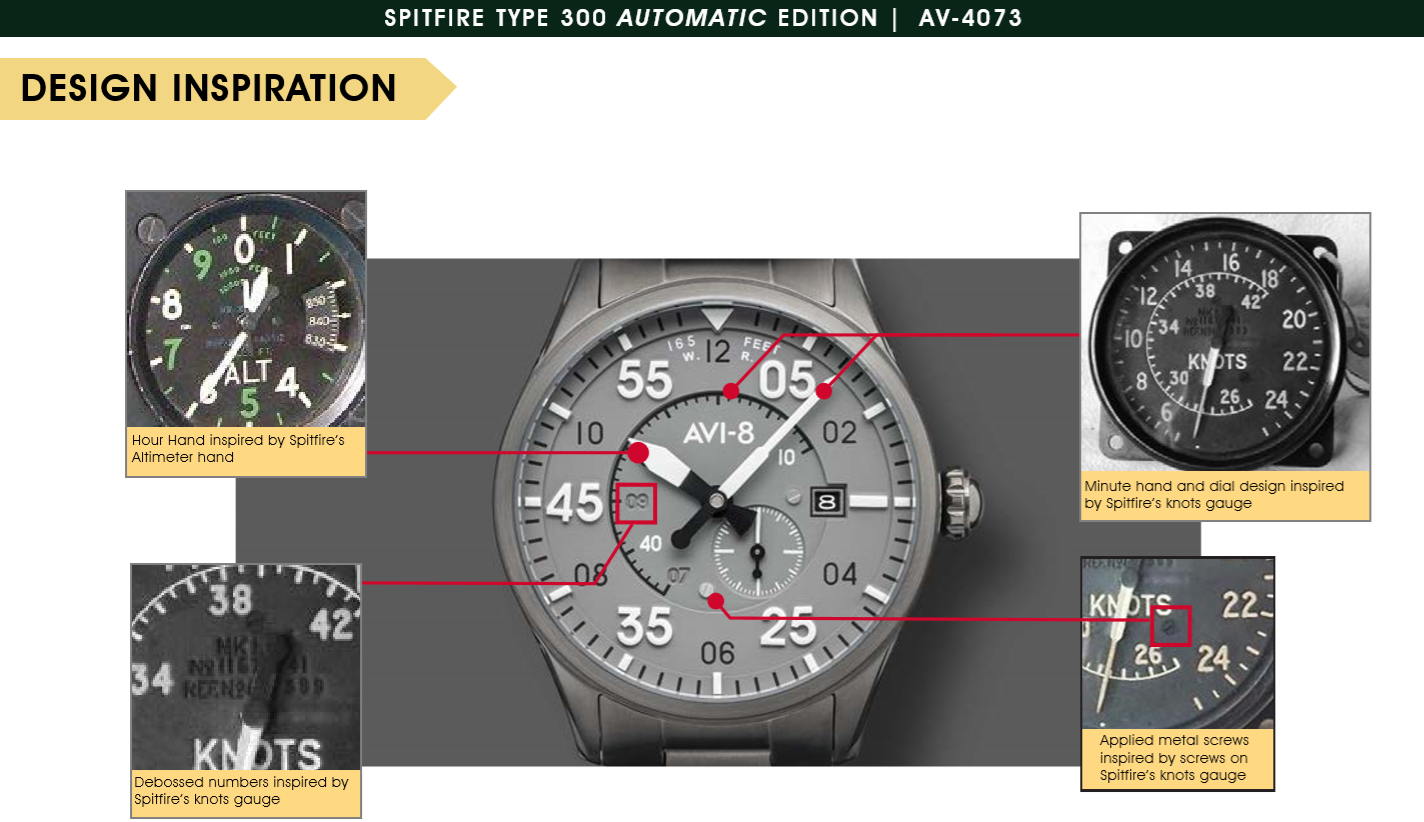 The overall dial design is also based on the Spitfire’s knots gauge, which includes the inner track on the watch. This inner track provides either readings for the minutes (i.e. “40”) or hours (i.e. “07”) which contrast with the opposite readings on the outer track. For the 07 and 09 hours on the inner track, the numbers are debossed, which is yet another design cue taken from the airspeed indicators.

The dial features an inverted triangle at the top, which was originally designed to make it easy for instant orientation in any lighting condition. And there is a dial for sub-seconds in the 5 o’clock position. The curved inner track draws your eye to the small seconds, which sweeps with the automatic movement. It’s a nice touch.

All seconds and minute markings look just like the minimal markings on a gauge and give the watch its tool aesthetic. The outer ring of dial, or the rehaut, slopes downwards. It’s subtle, but it helps focus the eye in a dial with this much detail.

The large Arabic numerals for the minutes, the 12 o’clock triangle, and the hands are all applied with a generous amount of luminova, which makes this watch a good companion in the dark.

A date window at 3 o’clock balances the dial, and overall the watch is immediately readable with a coherent design. Those used to sitting in a cockpit will enjoy the design cues of each marker.

The AVI-8 Spitfire Type 300 Automatic comes in several variants, but we got a lighter grey dial, and it fits the watch well.

First the essential details: the case is 42mm in diameter in stainless steel. Case thickness is 13.6mm, so it might not slide easily under a tight cuff. The AVI-8 Spitfire is rated for 5 ATM water resistance (50 meters), so it’s best kept in the air not the ocean. 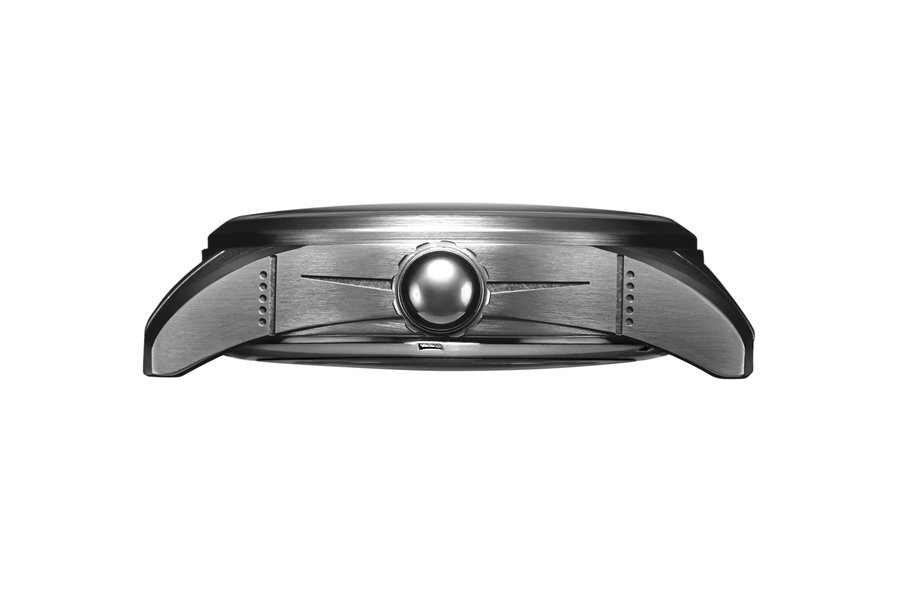 The watch has a slightly-domed sapphire crystal with anti-reflective coating. Sapphire is the preferred crystal for scratch resistance, and it’s great to have in a watch at this price point.

Although this watch is most notable for its design inspiration, the case has a good weight to it and doesn’t feel cheap.

For design, the case follows the dial in its adherence to the design principles of the actual Spitfire aircraft. The gentle curves of the case up to the lugs evoke the iconic rounded wings and form of the original plane.

Special attention was paid to the side of the case, which is a nice surprise. The bulbous crown represents the nose of the plane, and there are two engravings that flank the nose that form the shape of wings from a frontal view.

Additionally, there are multiple small screws on the lugs, which mirror the look of the bolts on the Spitfire. AVI-8 should be commended for the attention to detail. For a watch that is designed specifically to pay homage to an aircraft rather than another watch, these small touches pull the theme together.

The watch includes a stainless steel bracelet with a deployant clasp. The deployant clasp is nice for the added security. The metal bracelet is decent quality, but AVI-8 also includes grey leather strap that is higher-quality. The strap is APC’s preferred method to wear the Spitfire.

The lug width is 22mm and tapers down to 18mm. AVI-8 also promises to include a genuine leather strap to fit the 22mm lug width, so you can change out the bracelet if leather is your style.

This Spitfire Type 300 Automatic is, as the name suggests, an automatic watch. This means there is no battery to change, and the mechanical movement is powered by the movement of your wrist.

Specifically, AVI-8 has chosen to use a modified Miyota 8218 movement with 21 jewels. The Miyota is a reliable movement with fairly good accuracy. Nothing special, but nothing to worry about.

The standout part of the movement here is the rotor. The rotor, which rotates and powers the mainspring, is designed as an overhead view of the Spitfire plane. The elliptical wings, the propeller, and even RAF roundel symbols are there. 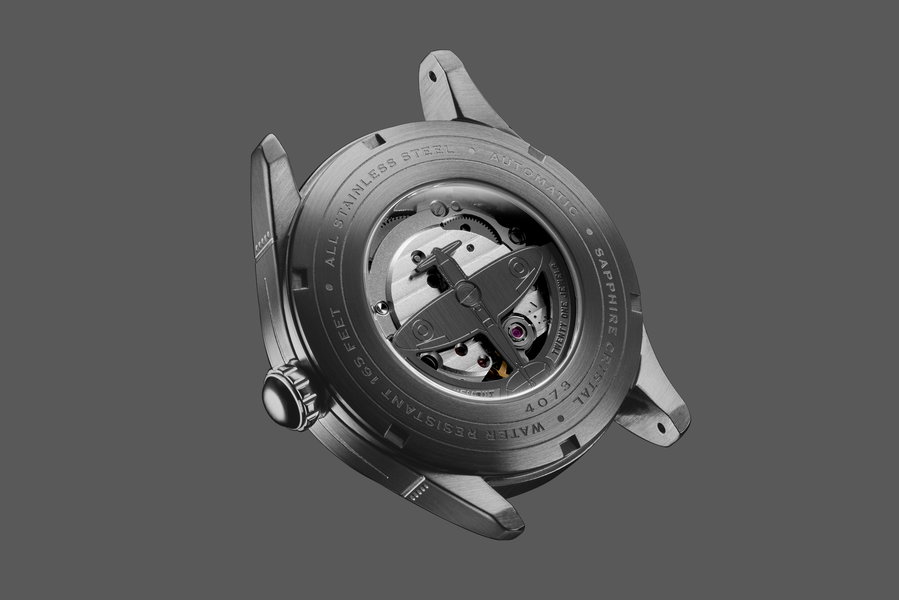 So if you ever forget what aircraft your watch is honoring, you can just turn over the timepiece and check it out yourself with the clear exhibition caseback. For something that will go unseen by everyone except the wearer, the rotor makes for a thoughtful inclusion.

For a well-crafted case, thoughtful design, and automatic movement, AVI-8’s Spitfire Type 300 Automatic is a bargain at a price point that lands between $395 and $425, depending on if you want your stainless steel watch with PVD coating.

You can sign up today on AVI-8.co.uk, and everyone who signs up will receive a promo code for the watch when it officially releases for purchase on February 28th.

The AVI-8 Spitfire Type 300 Automatic is a worthy tribute to a legendary aircraft. You can’t wear the actual Supermarine Spitfire on your wrist, but this is the next best thing.

AVI-8 stayed true to their mission. They’ve translated an aircraft as a watch, and this timepiece makes for an excellent conversation piece for any commercial airline pilot in the skies today. 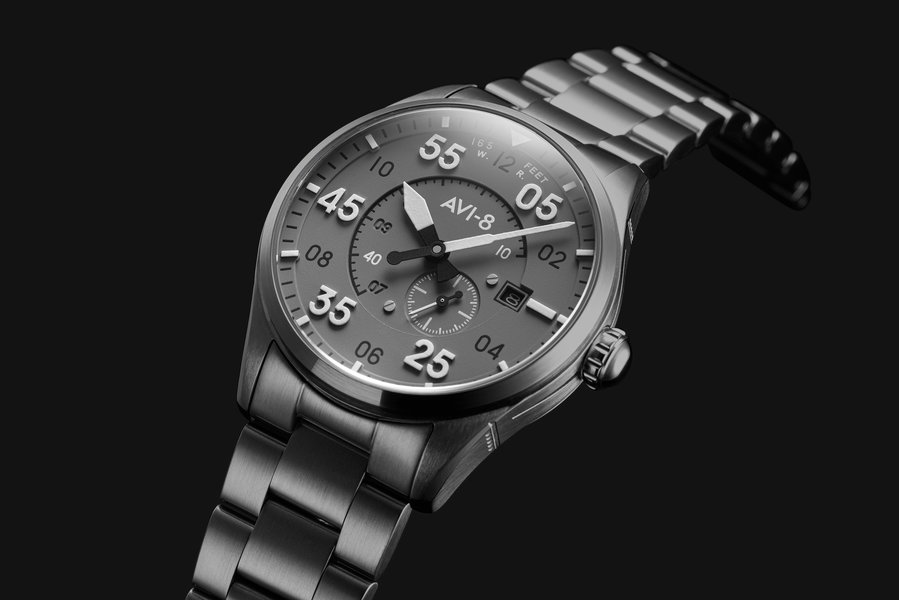