Pilot Salaries: Which Airlines Had the Highest Pay in 2015?

Published: 12-22-2015
Last year we took a look at the airline pay scales submitted to APC by our users. Now we’re back with an update.

In just its first three quarters, 2015 has already been the most profitable year in industry history, recording $22 billion in operating profits. These record-breaking numbers are largely due to the cost of jet fuel dropping down to $1.32 a gallon, a 35% drop from last year according to the International Air Transport Assn. The Department of Transportation also reports airlines squeezing in more passengers per cabin, filling in 83.88 percent of seats in 2015, compared to 83.76 percent last year.

With these numbers trending in the positive direction for airlines, have the profits been passed down to pilots? We analyzed the payscales submitted to APC to create a breakdown of what the Legacy, Major, and Regional airlines pay their pilots on average, as well as noticeable increases and decreases in pay.

Legacy
The US Airways-American Airlines merger created a shift among the legacy carriers. American Airlines made the biggest leap on this list, going from second to last to the top spot with a $60.27 jump in average pay. Every airline but Delta recorded an increase in average pay, which is likely due to the addition of the Embraer 190s to Delta’s fleet; Delta pays their EMB190 pilots just $133.50 an hour, on average, bringing their average pay down by $4.86 from 2014. By comparison, American pays their EMB190 pilots an average of $143 an hour.

Major
Southwest Airlines didn’t make any adjustments to their pay in 2015, but took the top spot once again for the second straight year. Sun Country Airlines took a big jump in 2015, and their efforts to attract and keep talented employees is clearly evident, paying their first year pilots more than last year’s total average of $98. After its first profitable year and filing for IPO, Virgin America continued their upward trend in 2015, with a pay increase of $27.75. With the addition of the fuel-saving Airbus A321neo to its fleet, 2016 could be a bigger year for Virgin and its pilots.

Regional
Corvus holds the highest average pay for the second straight year due to their first-year pay of $95 an hour. Although Republic has the highest yearly pay with $120, their first-year pay of $67 brings down the average to $91.23. PSA is the lone airline on the list with a decrease in average pay, but their $5,000 sign-on bonus and career pathway to American Airlines may be enough to offset it. The profiles of SeaPort Airlines, Air Choice One, and Envoy Air (formerly American Eagle) were all added to APC just this year, so it will be interesting to see how they fare in 2016. 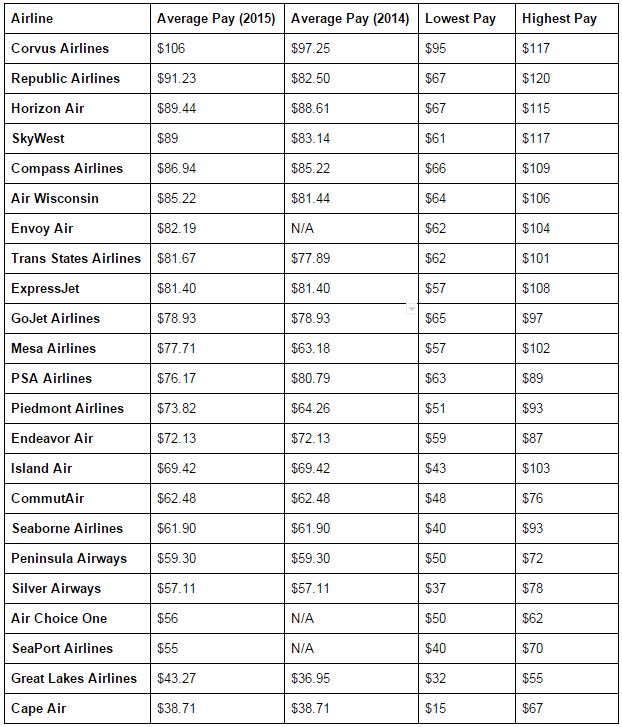